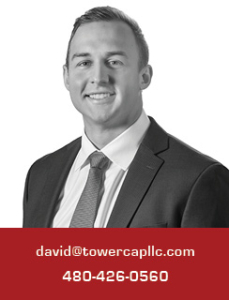 Prior to joining Tower Capital, David spent two years at CBRE, where he served as an Associate within CBRE’s Advisory & Transaction Services Group, specializing in providing comprehensive office market solutions, primarily within the Phoenix Metropolitan Area. While at CBRE, David participated in 111 office leasing and sale transactions, totaling nearly 1.8 million square feet and $1.98 billion dollars in consideration. David was an active member of CBRE’s Rising Professionals Group; an internal group comprised of up-and-coming younger members of the firm. David began his career with Marcus & Millichap, where he served as an Investment Sales Associate focusing on acquisitions and disposition of industrial assets in the Southwest, where he received multiple awards both locally and nationally.

David is actively involved in the National Association of Industrial & Office Professionals (NAIOP), NAIOP’s Young Professionals Group (YPG) and NAIOP’s Developing Leaders (DL) programs. He is also an Associate member of the Urban Land Institute (ULI). David graduated from the University of Arizona with a B.S. in Urban & Regional Development with an emphasis in real estate development and finance, as well as a minor in Business Administration.