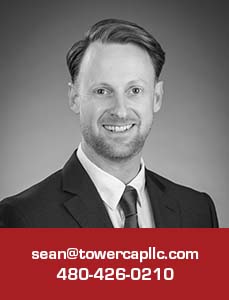 Sean St. John serves as senior analyst at Tower Capital. Prior to joining Tower, Sean held an analyst position at a Scottsdale-based finance company. In this role he underwrote all property types along with development, bridge, and permanent financing transactions.

Sean grew up in Albuquerque, New Mexico and relocated to Arizona in 2002 where he attended and graduated from Arizona State University with a degree in Finance. Sean also earned an MBA from the University of Phoenix and began a career in corporate finance with a Fortune 100 company as a financial analyst where he underwrote over 1000 transactions.