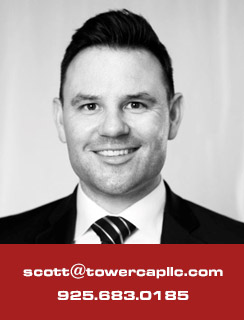 Prior to joining Tower Capital, Scott was Vice President of Capital Markets for the Menlo Group, a full-service commercial real estate brokerage specializing in medical office, retail, and industrial properties throughout Arizona. While at Menlo he was responsible for the company’s investment real estate efforts.

Preceding Menlo Group, Scott worked for BioHorizons, a dental implant company, as an Executive Territory Manager in Chicago and as Director of Sales in Phoenix. He earned Rookie of the Year and twice earned Sales Rep of the Year.  Scott is a graduate of Sonoma State University, where he earned a BS in Business Marketing. In his spare time, Scott enjoys golf and travelling.